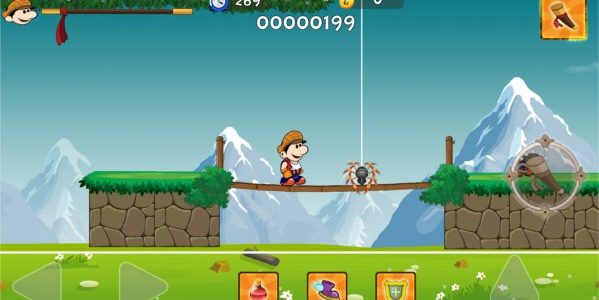 Get ready for an adventure. There are worlds to be explored. The following list contains smartphone games set in fantasies. There are enchanted forests, Arab castles filled with royal guards, and sky-high platforms. Check out the scores and highlights in these reviews.

This game features the legendary Arab thief Aladdin. The goal is to make it through a level filled with royal guards, pitfalls, fire obstacles, and water traps. There’s floating platforms that travel up and down; time your jump carefully. Use apples as weapons; throw them at guards. Along the way, collect as many coins as possible.

To play the game, press the right and left arrows to move right or left. Tap the up arrow to jump. While jumping against a wall, tap the up arrow again to double jump. This will allow you to jump to higher platforms.

What’s good about this game? It has elevated platforms filled with coins and royal guards.
What’s wrong with this game? Some of the platforms are too narrow, making it impossible to accurately time a jump over a guard.

In this game, you play a firecracker that doesn’t want its fuse to run out. It decides to run for its life. If you don’t make it to the water in time, the firecracker will explode. The levels become more and more challenging. Look out for barricades, rolling boulders, torpedoes, and launching platforms.

To play the game, press the right and left arrows. This will move the firecracker right and left. Tap the red action button to destroy barriers and erect them again. Use a smart strategy to complete the level.

What’s good about this game? The color temperature is comfortable, and it has a simple layout.
What’s wrong with this game? Nothing. It’s great.

This is a platform game that takes place in an enchanted forest. There are spiked beetles roaming the grounds, hopping toadstools, and stinging hornets flying about. There are floating platforms that move up and down and bottomless pits. The goal is to make it to the end of the level.

Use weapons to defeat the wildlife. Tap the attack button (encircled stick) to throw rocks at beetles. This button can be used to throw bombs and boomerangs as well. To cycle weapons, tap the weapon selection button (square-shaped with weapon icon). If you don’t have any weapons, you can still use the attack button to strike the enemies. Press the left and right triangles to move left and right. Tap the up triangle to jump.

What’s good about this game? You can throw weapons and strike enemies instead of jumping over them.
What’s wrong with this game? The ground level doesn’t immediately appear after jumping down from a higher platform.