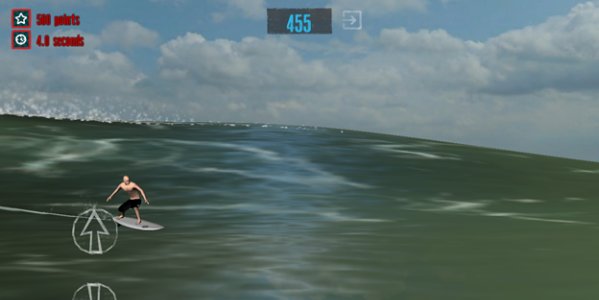 The Olympics are over. If you want more extreme sporting action, download the games listed in this review. There’s a snowboarding game for Android smartphones, an off-road motorcycle game, and a surfing game. The reviews are insightful, and there’s a list of features at the end.

In this game, you control a snowboarder that slides down slopes filled with ramps. The levels contain snowy environments. The goal is to reach the finish line while completing various objectives. Use the analog stick to accelerate and stay within the track lines. At the start of each level, tap the screen to skip the level overview camera shot; it’s too long.

You can perform various tricks and collect items on the course. To perform a back flip, push the analog stick down while in the air. Release the analog stick at the right time to land safely. If the snowboarder isn’t traveling fast enough, some tricks might not work. To accelerate, push and hold the analog stick up.

What’s good about this game? Cool snowboarding tricks
What’s wrong with this game? There are multiple paths in each level; this makes it confusing to navigate.2.

You could surf through the level with the up and down arrow, avoiding crashing waves. However, to unlock the next surfing region, you may have to complete challenges. This includes performing complex moves.

What’s good about this game? Surf waves and surf sounds
What’s wrong with this game? Some surfing tricks are too fast to see after tapping the buttons.

This is a motorcycle game that takes place on obstacle courses through exotic environments (angled side-scrolling). There’s ramps, bridges, and hills. There are checkpoints. While jumping on ramps, use the leaning buttons to land safely. You may have to use the lean button while accelerating to avoid falling backwards. After the tutorial, you can play in new locations. You can practice riding in a new stage or race against another player. New game modes are unlocked after completing 3 levels.

What’s good about this game? The background environment is well-designed.
What’s wrong with this game? Racing against another player on an obstacle course is distracting.