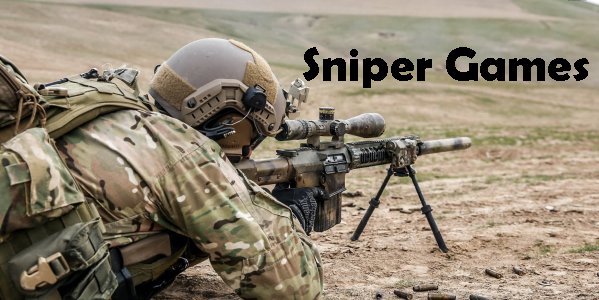 One of the most popular types of games is sniper games. There are several in the app store. Some are mission-based, while others involve online matches against other players. The following list contains five sniper games for Android smartphones.

There are several different types of missions in this sniper game. One type involves targeting a suspect in a crowded city. You will be given information about the suspect, usually the color of the jacket, and the goal is to kill this person before he escapes. You are armed with a sniper rifle equipped with a scope and several rounds.

The main character in this game is a stick figure that lives at home. When sniper missions are sent, he accepts them and goes to the location. There’s a map that shows where the hit is taking place. There are several rifles to choose from.

What’s good about this game? The game design is refreshingly unique.
What’s wrong with this game? Printed curse words

This is a high-intensity sniper game with an annoying tutorial. The targets are in different parts of the map, and the goal is to kill all of them before they kill you. There’s different sniping postures, a zoom-in slider bar, and a fire button.

Compete against other snipers in this game. The goal is to get closer to the center than the opponent. There are three courses – Iron sights, Acog 4X, and Telescopic. There’s also a training mode. There’s a huge selection of weapons in the store.

What’s good about this game? Online competition with another player
What’s wrong with this game? Slow aiming

This is an online sniper game with several modes including deathmatch, team deathmatch, domination, and tournament. Each mode has several maps with well-designed environments. You can create a squad or join one.

What’s good about this game? There’s an option to highlight enemies, which makes them easier to find.
What’s wrong with this game? Music

The best game is…Sniper 3D Assassin. This is the perfect mission-based sniper game for smartphones. There’s a lot of different missions, which makes it interesting to play. The sniper controls are easy to use on a touchscreen. The game also works with the accelerometer in the smartphone, so you can switch to motion controls if you want to.