As a big sports fan, I am always on the lookout for Android apps that help me keep up with my teams, players, and sports. I really got into soccer or football as it called outside the US, when the World Cup was center stage a couple years back. The Android app that I am highlighting today is PTSoccer EPL or PowerTable Soccer, an app for the English Football League. If you are a fan of English Football, this free app should be on your Android.

PTSoccer EPL by Catalyst People Limited is a free app that provides up-to-date news, videos, match reports, live scores, and a match event tracker. The free app does have ads but they really do not take up too much real estate. I found the app easy to navigation and well organized. It did not take too many clicks to get to the information I wanted/needed. 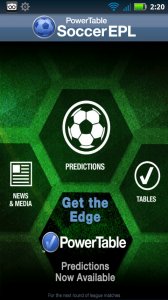 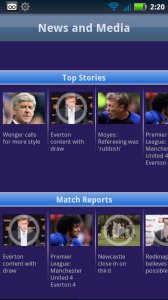 The key component of the app is the PowerTable™ . Not being familiar with the term, I contacted Catalyst People Limited to get an explanation.

The PowerTable™ was borne from working with Premier League Managers, Coaches and Players to analyze a teams potential to win a game. The PowerTable™ calculates who brings the most power, resources and best on-field performance to each game.  Using the analysis engine and the study of recent form the PowerTable™ predicts a likely outcome for each match and a set of realistic game tips.

We analyzed every goal scored, every point won from every game since 2000. We created measurements for team performance, individual players in each position, the track record of the Manager and each member of his back-room team. We designed a measurement for the quality of the Training Ground, the quality of the Board, the Finances, the Stadium. Every critical fact or figure that could make a difference to the performance of the team. 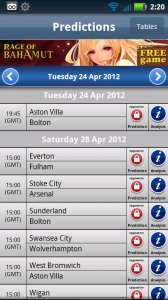 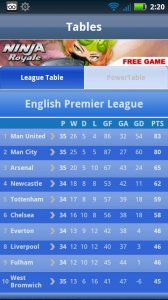 A lot of work has been put into the match predictions and their success rate in prediction is very good.  Each week they predict the outcome of each game in the EPL and posted them in the app on Wednesday of that week by 5pm GMT.

Now to access the predictions for each match there is a one time fee of £0.69 or about $1.10 USD. This fee unlocks all of the premium content of the app- the predictions, match tracker, in-game live areas of the app.  If you do not want the predictions component of the app, the other aspects of the app still make it a valuable resource for English soccer fans.  If you want to know standings, stats, schedules, PTSoccer EPL has it.

Finally I asked Catalyst People Limited what the future held.   They are preparing to launch a Euro 2012 app and will be expanding into Cricket and other football leagues for the 2012/13 season. So if you want to keep up the the English Premier League and all of the football (soccer) action, give PTSoccer EPL a try.