Galactic Encounters reminds me of those fun space arcade games I used to play. The premise is simple, save the miners from the alien attacks. The background: in the future we humans are forced to mine on other planets, specifically planet G530. Well we need to help the 150 miners flee and make it to the escape ships. Of course the evil aliens know what you are doing and are coming to stop you. You will not be able to save them all but you have to try. 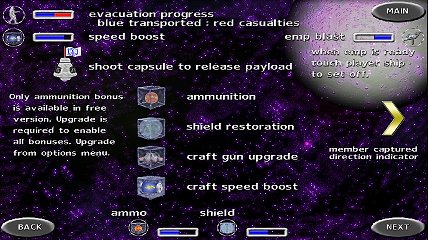 The game controls are very straight forward. You have two virtual joysticks. The left joystick moves your ship back and forth across the terrain, while the right joystick changes the direction of your cannon. Firing is automatic so you simply need to move into position to destroy the flying enemy and objects. I say simply but it really isn’t that simple.

There is a ton going on at one time and it is hard to keep up with it all. After a few tries I found if  you are gentle on the joystick and focus on moving over short distances then you will do better. Do not try and race back and forth across the screen. 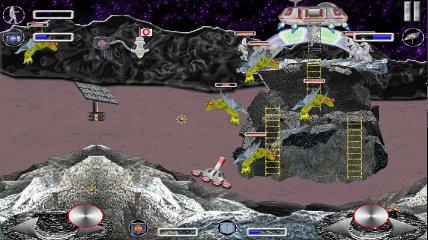 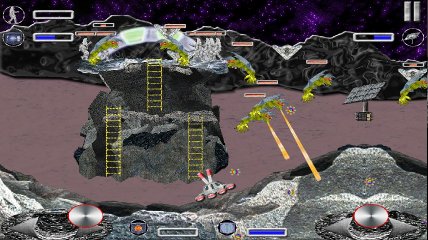 Another key to doing well is getting the bonuses. The free version only has the ammunition bonus,while the paid version enables all other bonuses. To upgrade to the pro version there is a one time in app purchase that unlocks them all. I would recommend getting the pro version if you want to try and beat the game! I am also glad there is a pause button to the game.

I spoke with the developer and he plans to support the game in terms of bug fixes. He does have a second mission sketched out if the game should do well.

So if you enjoy hard space type shooter then give Galactic Encounters a try.

From the app listing: GALACTIC ENCOUNTERS GAME LAUNCH CONTEST
The first player to achieve the gunner rank of MARVEL and submits the game code displayed on the bottom right
corner of the winning game screen will win a $100 prize. Minimum game version of 2.1 required to receive game code.
Submit code to algorithbit@gmail.com with game code in the subject line.