Stronghold Kingdoms is a MMO PC game that has been redesigned for mobile. It is a true cross platform game for Android, iOS, and PC.

When you begin you will pick a spot on the map to start your village. You will then go through a brief tutorial to show you the ropes. After the tutorial you are thrown into the world with a 4 day window of peace where you cannot be attacked. It is during this time you need to build up your kingdom- army, castle, resources, etc.

This is a massive game and there is a ton of things to do. I have played similar games to this but to be honest, I got lost after the tutorial. I really did not know where to start or to even find my village on the map. After some hunting around I believe I found my village but it did not look like what I started during the tutorial. The support or help section in the main menu is a link to an online wiki. I went to the wiki on my PC and it is very through and has a lot of information in it.

I enjoy these MMO type games but for this game, right now, I would recommend starting your Kingdom on the PC get it going, read the resources, and then play it on mobile when you are away from the computer. The game is well designed and provides player with a ton of options but as a new player, I really had a hard time getting into it on my Android device. One of things I really wanted to see was pinch to zoom, but it is not an option.

So if you enjoy building kingdoms, forging alliances, attacking others, then give Stronghold Kingdoms a look (on the PC). If you are already playing this game, let me know if you have played on mobile and how the experience was for you. 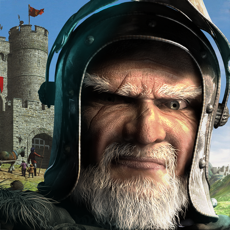 “Kingdoms grew from thousands to millions of players as a PC title, so it’s no surprise that most of our existing players want it on Android” said Nick Tannahill, Marketing Manager at Firefly Studios. “This is the culmination of years of hard work from our devs, porting a game we never expected to be in the top 100 played games on Steam or featured in the app store! This game grew from a small prototype inspired by the earliest free to play titles in 2007 to our biggest release in years. It gives us huge pleasure to share that with a new set of gamers on Android.”

Stronghold Kingdoms on Android includes all major features found in the PC, Mac and iOS versions of the game, along with the new mobile touch controls and cross-platform play. Firefly’s first persistent online castle sim comes to Android five years after its original Steam release and nearly ten since development began on the game’s original prototype.